Gerald Turibarungi, 27, a holder of Bachelor of Science in Education specializing in Mathematics and Economics is a resident of Keirere, Central Division, Bushenyi-ishaka municipality, western Uganda.

He finished his studies in 2017, but could not get employed. He provided a voluntary service up to when he felt that he had volunteered enough and decided to find his way out.

Through much resilience, Turibarungi began a cleaning and fumigation business that saw him learn how to manufacture liquid soap, a skill he has used to empower young people to create a world of entrepreneurs.

During his high school days, Turibarungi dreamt acquiring a life skill and passing it on to other people. He never wanted to undertake a course in Education, but circumstances dictated. He studied through a bursary scheme which sought to culture students into teachers, who would go back to teach at the school. This time round, science subjects were emphasized.

“During my Advanced level, I was given a bursary, which would see me get trained to become a teacher and come back to teach at that school. In other words, I never wanted to become a teacher, but my sponsors dictated and I went for Education at University. This was not my calling. I wanted to attain a life skill and become an entrepreneur in future.” Says Turibarungi

He had his University Education at Ankole Western University, where he was the Guild President. During his service as students leader, Turibarungi engaged in several University programs including Public Relations in which he marketed his institution in different parts of Uganda.

He liked what he did and would thereafter post his University marketing tools and campaigns on social media, something that put a smile on his faces of the University Administrators, who in the long run employed him as an Administrative Assistant, an office that saw him attend to students and parents who wished to join the University.

In November 2018, things did not move smoothly due to an ailing financial situation of his workplace. This made Turibarungi leave the job and look for means of survival.

“Time came and we got financial issues at my place of work. This made me leave because I had even failed to buy myself a shirt. I also found it hard reaching my friends due to lack of Airtime. So, I decided to leave and look for survival means,” Turibarungi recollects

While at University, Turibarungi did not just sit down because there was no money. He rather used the available resources like computers to learn how he could break the glass ceiling and move on. He used the internet at office to read far and wide about how one could become a social entrepreneur, a path he pursued after enough research.

“I read about different business ideas, but as someone that had no money, I wanted to settle for something not expensive. That’s how I settled for a Cleaning and Fumigation business,” he recalls

Turibarungi thought the Cleaning and Fumigation business didn’t require huge sums of money to start, but discovered that he needed detergents. This made him get basic training on how to manufacture detergents like liquid soap.

He thereafter cleaned someone’s house and earned Thirty Thousand Shillings, which he used to buy ingredients and materials like Sulphoric acid, SLS Ungaru, Caustic soda, preservatives, perfume, color, salt, etc to help him manufacture liquid soap on small scale. His first trials on liquid soap did not yield much as he got a loss, partly because he mismatched proportions and ratios.

“I tried on a jerry can, but things did not work out. It’s like I made a mistake in mixing the ingredients. So, my first attempt became a loss and I felt hurt. I didn’t give up because I knew what I wanted. I called my brother and explained what happened and he lent me Forty Thousand Shillings, which I used to try my lack on two Jerry cans. Guess what! This time I was successful!” Turibarungi expresses

Getting set for bigger things

The two jerry cans that Turibarungi succeeded in making were a good push for him. This is when he started packing, but in a rudimentary way. He started packing his liquid soap detergent in empty mineral water bottles and things moved on well as local markets learnt of the product.

Out of the Forty Thousand Shillings he got from his brother, Turibarungi managed to get a profit of Seventy five thousand, which he re-invested and later raised about Three hundred Thousand Shillings in a period of one month. He moved on to have his soap packed in jerry cans and containers. He expanded his business by visiting schools, which later gave him tenders.

During the 2018 Christmas season, Turibarungi’s services were already felt in the community. Different people from the urban centers who wanted to go to their villages for Christmas holiday contracted him to clean and fumigate their homes. This brought in some good money because he did the work professionally as if he had been in the field for a good time.

“By that time, I had attracted some youths to my business. The season was good and I employed about eleven of them and to my surprise, I got enough money to pay them. The money I got from the business put a smile on the faces of my family members and they enjoyed their Christmas,” he recollects

In January 2019, Turibarungi found a need to register his business as a company so that he could obtain legal Identity/status, safeguard his business name and access opportunities like loans, tenders, financing etc in case he wanted. He registered the business and called it RoyalMax Home Care Services Limited. This came with benefits because organizations began trusting him, making him fully penetrate the market.

The business boomed and he started selling a jerry can of liquid soap at 35000-45000 depending on the customer.

“I remember, one time I supplied over 30 jerry cans of soap at once. That’s when I saw real benefits of employing yourself come to me. We have since then got exposed to different organizations. We have signed up with Educate Uganda and they are helping us train youths on how to do business. We have trained students in over eighteen schools on how to make soap. These schools have because of that given us businesses,” he eagerly explains

Turibarungi has seen his venture grow to a level of being registered as a company, a step that he views as an achievement.

The business has made Turibarungi a self-reliant young man. This he says makes him happy because he doesn’t have to beg. He is also able to support his parents.

Because of the Cleaning and fumigation business, Turibarungi has managed to start other ventures like Crisp making with a dream of creating a big business empire in the near future.

Locally made products are often despised by several people. They want something that is from Kampala or outside Uganda. Turibarungi says this has become a challenge and threat to his business.

“It is as if people enjoy living with cockroaches, bats and rats in their houses and they will not hire you to clean and fumigate their houses.” He says

To address the prevailing challenges, Turibarungi has resorted to community sensitization programs so that people can realize how good and rewarding it is having their homes fumigated.

The business has empowered Turibarungi to believe that he can. He has gained more courage and inspiration to do what he thinks benefits him despite the tides and waves involved.

He has also appreciated the importance of attending seminars and trainings because they help him to learnt what he does not know.

For one to succeed he or she must make right connections; work on the image and reputation and provide quality services.

He has also learnt that giving back is as important as being given and communities live well through sharing what they have. Everyone needs to be supported to meet their needs.

Turibarungi has plans for his business. He wants to see it grow into a strong empire that will have many people get employed so that they can earn a living and support their families.

“I want to build a sustainable company through which many people especially the youth will be employed and prepared to realize their potential. I want to have my business have an impact on my community,” he dreams

He has linked his business with Non Governmental Organizations like Work for Life so that they can help him expand his knowledge on Strategy, Sales, Marketing, Leadership, and Financial Management. This way, Turibarungi will grow big.

Advice to the youth

Learning does not stop at University. When you finish that level, it’s like you have started the journey. Open your mind to learning and make sure that you learn something that will benefit you every day.

All small businesses can grow into something big. Appreciate humble beginnings and turn every opportunity into a big business venture. 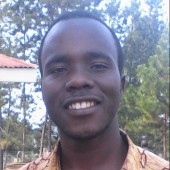